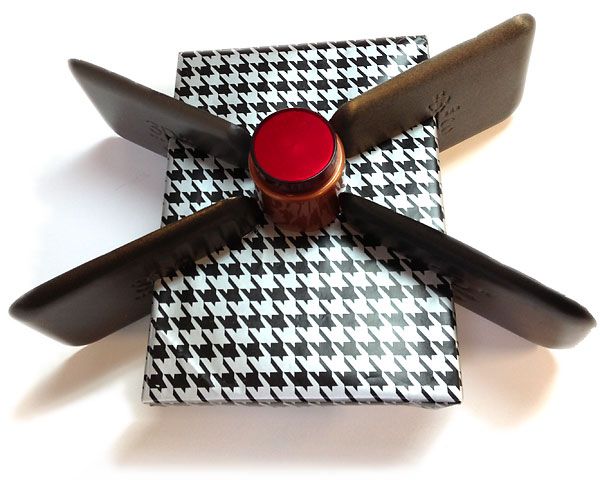 The idea for this wrap came to me just after awaking. I was thinking about slabs of black foam from meat-packing trays. They are easy to cut, thick enough to hold a lot of hot glue, and thus make good sculpture components to a wrap. I’ve used them before (Meat-Tray Fins on Red Bag Wrap).  This time the idea was to cut a slot into the slabs so that they made not only strange fins, but also legs to elevate the package.

Later in the day I wrapped the gift in a large piece of recycled wrapping paper. It’s silver & black houndstooth pattern had a mechnical quality and colors fully compatible with my industrial materials.

Cutting the foam trays involved a bit of guesswork. The trays are small enough that any attempt to make perfectly flat fins would produce relatively small pieces. So I decided to keep at least part of the trays’ rounded shoulders. I inserted my matte knife parallel the trays’ bottom plane, and carefully sliced with a reciprocating motion all the way around the tray. It worked pretty well giving me four round-cornered slabs which had gently-curving faces, resembling the back of an iPad, on one side of the slab.

I made a paper template in the shape of the slabs and then drew and tested the shape of the slot that would allow the fins to be slipped onto the package. It worked very well. Now I could play around with the placement of the fins. I had imagined at first that they would be aligned in parallel as in my first fin wrap. But I became intrigued when I discovered the stability conferred by a symmetrical X configuration.

Before gluing the fins I continued exploratory play looking for something that would sit in the small empty space at the center of the X. My favorite among various objects was an old standby of my recycling materials: a copper metallic plastic lid from an aerosol deodorant.

I used a drafting triangle to regulate the gluing process. Fat strips of hot glue attached the fins to the bottom side of the wrap. Holding the wrap carefully on my knees, I then added glue on the wrap-top backside of the fins. (This wrap is inherently stagey, having an inherent audience-vs-backstage assymetry.) I glued a cross-brace onto the deodorant lid, and then glued it to the center of the wrap.

I was not yet sure if I had a finished wrap. Poking around the bins I found a red lid from a cosmetic jar and glued it to the top of the copper-colored lid. That was it. The wrap was complete. It evoked a strong sense of abstract function. But what, exactly? It was the recipient of the gift who thought it looked like a space module. The wrap sits elevated off  floor, table or planet. It has a metallic palette. The curious cupola at its center is of ambiguous scale and purpose. Perhaps it is a big emergency button whose compression would set off a celebration.