I had two small boxes, about the same size as the he gift I wanted to wrap. They suggested to me the idea of making an irregular shaped “giftbox.” I set about to make a special skeleton out of the two boxes, linking them with beams of corrugated board, The gift fits right inside the space between the two boxes and their beams.

Extra pieces of board made the gift fit snug in order to make the task of wrapping this odd shape a bit easier.. Admittedly the task of wrapping this conglomeration in white paper was not that easy. I knew that there was no easy way to wrap this zig zag box with a single piece of paper. So I collaged it with numerous pieces of scrap 8.5″X11″ stationery. I used both thin tape and a bit of hot glue. Finally I had a solid white wrapped zigzag. I added three red ribbons one kind of red ribbon, and two pieces, of varying pattern black and white ribbon. I made the label out of small gray and very flat beach beach pebble. I inscribed the name with a marker.

I began with an 8.5 lb. kitty litter jug and a desire to cut it into a gift box with projecting arms. I cut off the top. Then I cut down along the four vertical corners, stopping when I got to a point I considered the top of the gift box that I was building; that was about four inches from the bottom. At this point I had a gift box with two wide walls and two thinner walls. The walls rose straight up from the box and my next actions would make the walls along the long side into curved ribbon holders. First I need to create the closure of the gift box. I took the short-side walls and folded them down, forcing a soft crease where the wall joined the box. Then both walls could be folded down, one on top of the other. I cut a 1/4″-wide slit into the bottom wall. I cut an insert-tongue into the upper wall, and fit it into the crease.

Now I was ready to convert the two longer walls into the ribbon-holding art. Eight vertical cuts created nine strips. I rolled them up and the jug’s plastic had enough memory to hold some the forced curling. Using small squares of double tape I applied eighteen pieces of ribbon to the plastic arc. I finished with a textured gold and black ribbon, and a name tag, which has two fold to attach it to the ribbon. 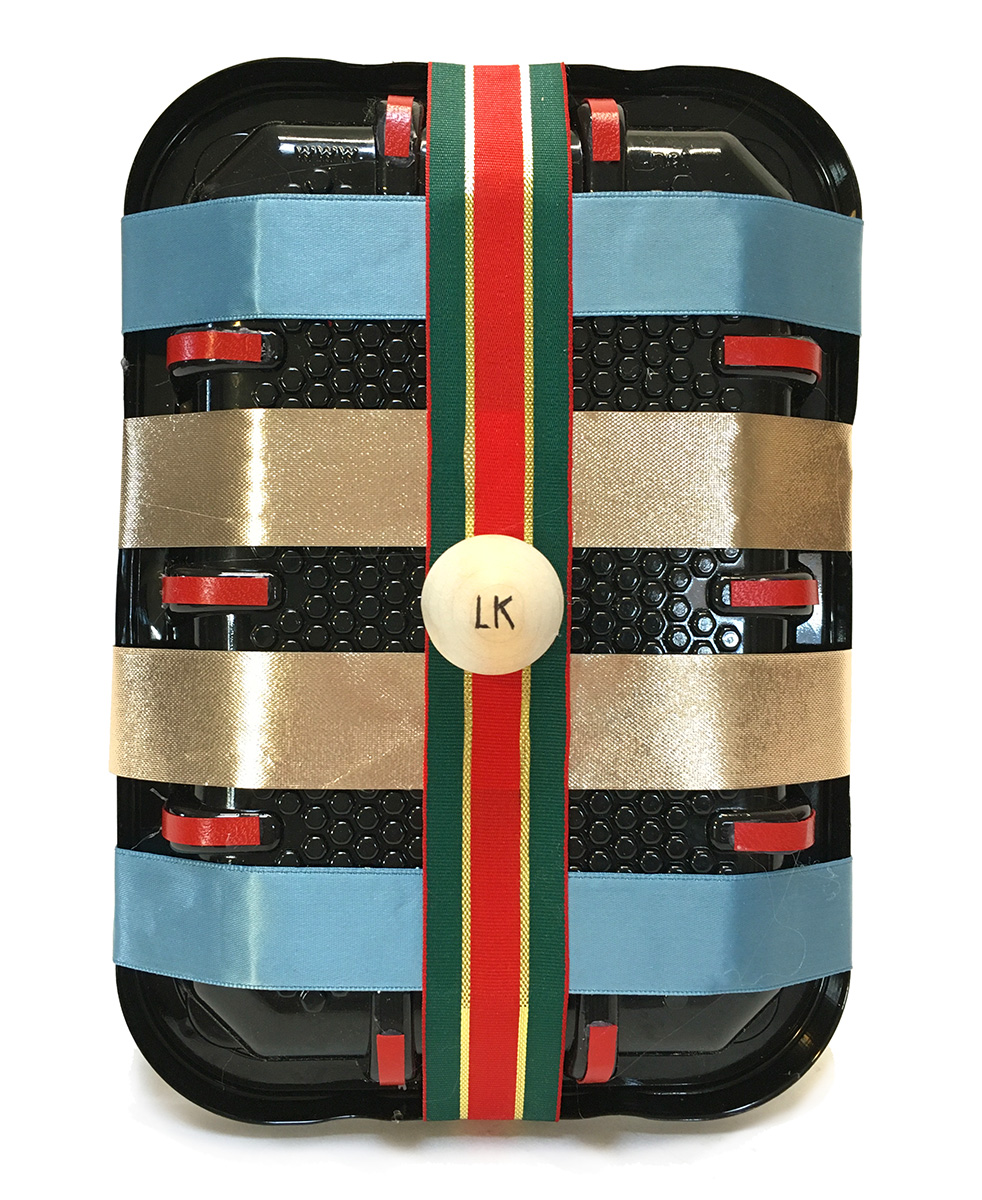 While cleaning some recycle-ables during kitchen clean up, I became fascinated with the lego-like textures of a black poultry tray. I saved two. The first step was to create a foam and tissue cradle for the gift. I then sealed up the two trays with four spots of glue. I moved on to the contemplative phase of the piece. I place various pieces of ribbon adjacent to see what felt good. I considered other material additions too, natural or man-made objects.

I decided to use mostly ribbon and ran a silver ribbon around the seam that joins the two trays. Next came the two gold ribbons, followed by the blue ribbons. I tested out various colors and textures before committing. I knew that I would be using the green and red ribbon as the transverse element. On it went.

Part of the beauty of these trays are the complexities of their topology. There are protrusions that define where the ribbons cross; they define the number and position of the ribbons. So my next step was to glue small pieces of red paper to emphasize these curved shiny shoulders.

The last step was the label. I had wanted some extra sculptural element, as noted above. I chose a wooden sphere, and sanded a flat spot on it to make attaching it easier. I wrote the recipients initials, and double-taped it on. 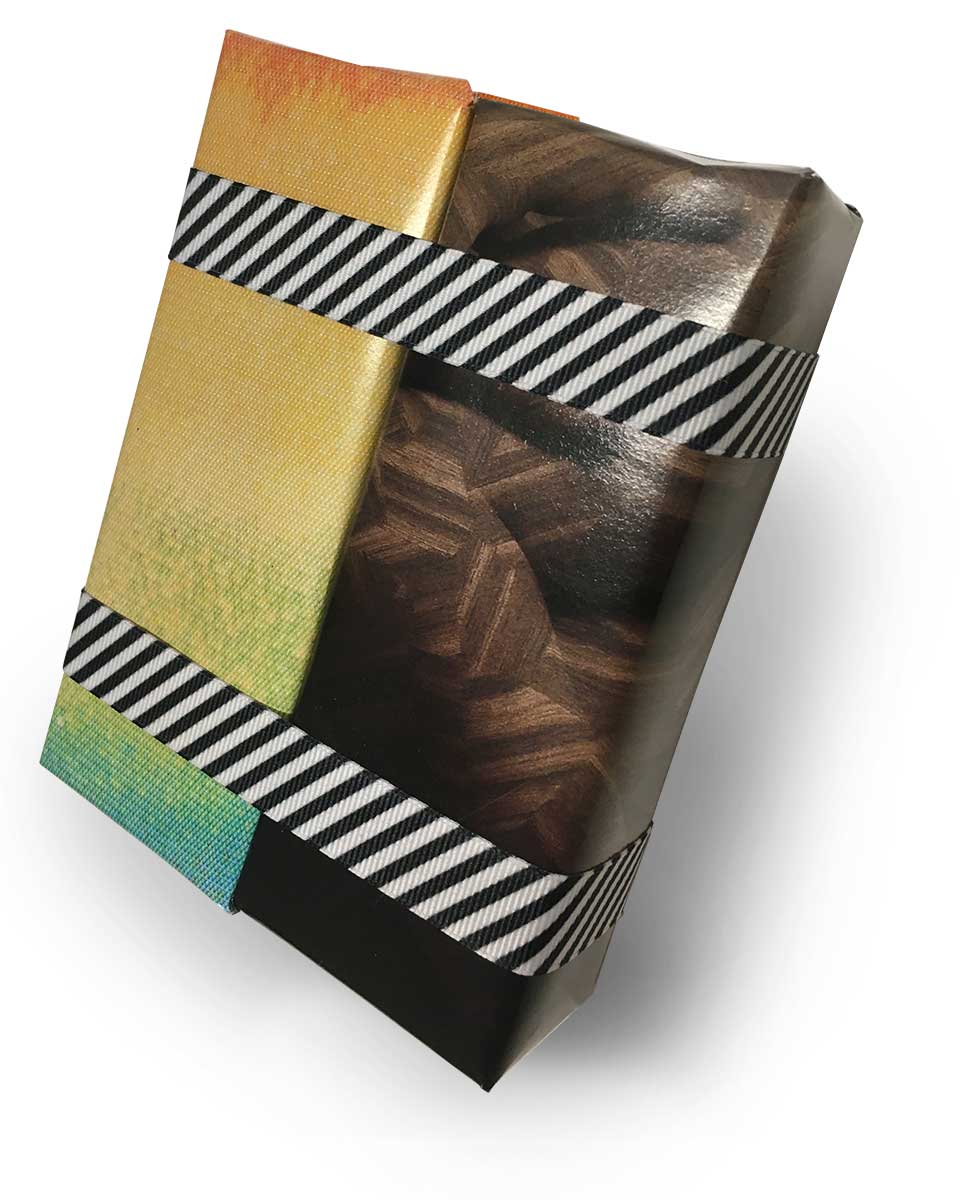 Simplicity conjoined with contrast. Two presents conjoined with ribbon. The wrap continues this season’s theme of magazine wrap. This is only my second two-piece wrap. The other was Wrap Synergy in 2010. 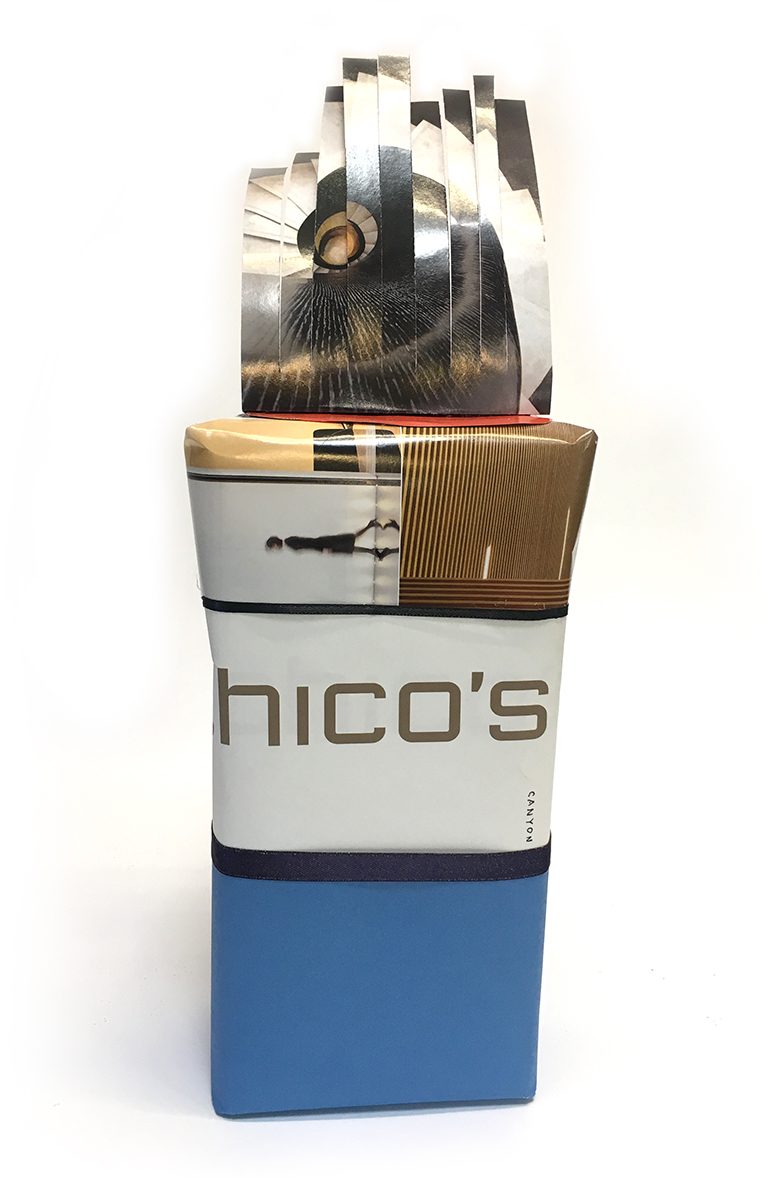 For the first step wrapping this medium sized gift, I cut down a white shopping bag and wrapped the entire box in it, using hot glue to secure the thick paper of the bag. I put a secondary blue wrap on the bottom, a piece of old Pantone paper. I then took a page from my magazine of the moment, an image with rectangular forms, a person, abstract photo detail and color complementary to the blue. I did not cover up the shopping bag’s branding, because the typography lends the whole composition a poster-like quality. Also the gift’s brand diverges completely from the this bag’s. Wrap Humor. To finish it off I took another magazine scrap and cut slices partway through it. I folded the uncut edge and glued it on top of the wrap. Carefully I shaped the teeth of this comb into gentle curves. The interplay of the rectilinear scrap & scissor-cuts with the curves of the actual spiral imagery in the photo & the shaping of the comb’s teeth adds a bow-like quality and completes the wrap. 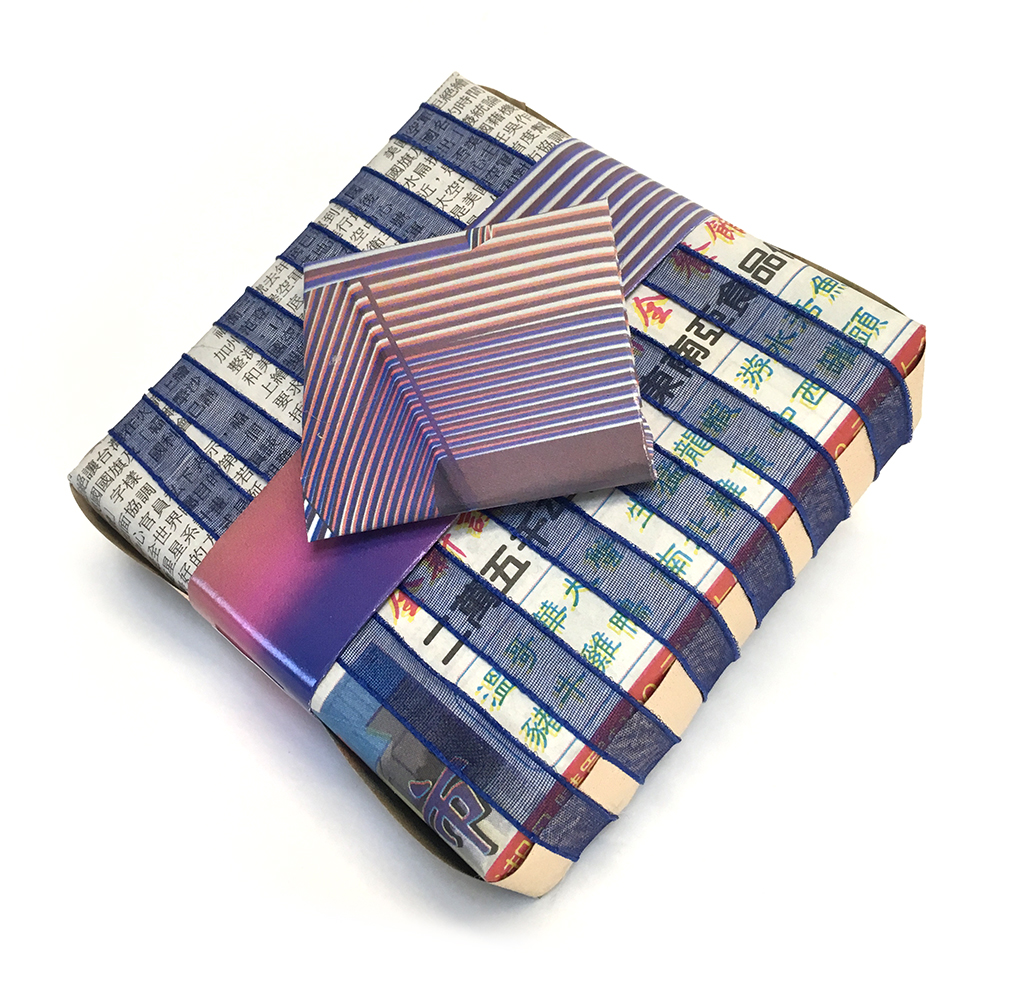 Wrapping with newsprint is a frequent first thought for someone who suddenly decides to wrap without wrapping paper. I chose to give this old method a try using a scrap from a local chinese-language newspaper. The solution to newsprint innovation was actually quite easy to execute. I took one piece of used ribbon and wound it in a spiral around the box. The hardest part was looking through a magazine for just the right page, which would deliver a photographic abstraction up to the task of tri-partite contrast: Han characters, transparent ribbon, and photo complexities, all within my red-blue color world. I cut a wide strip from the ad and folded it along the edges to make a band-wrap ribbon, attached it to the package. Then a took the remaining scrap, folding it to create the same puffy edges; I glued this “bow” onto the wrap. 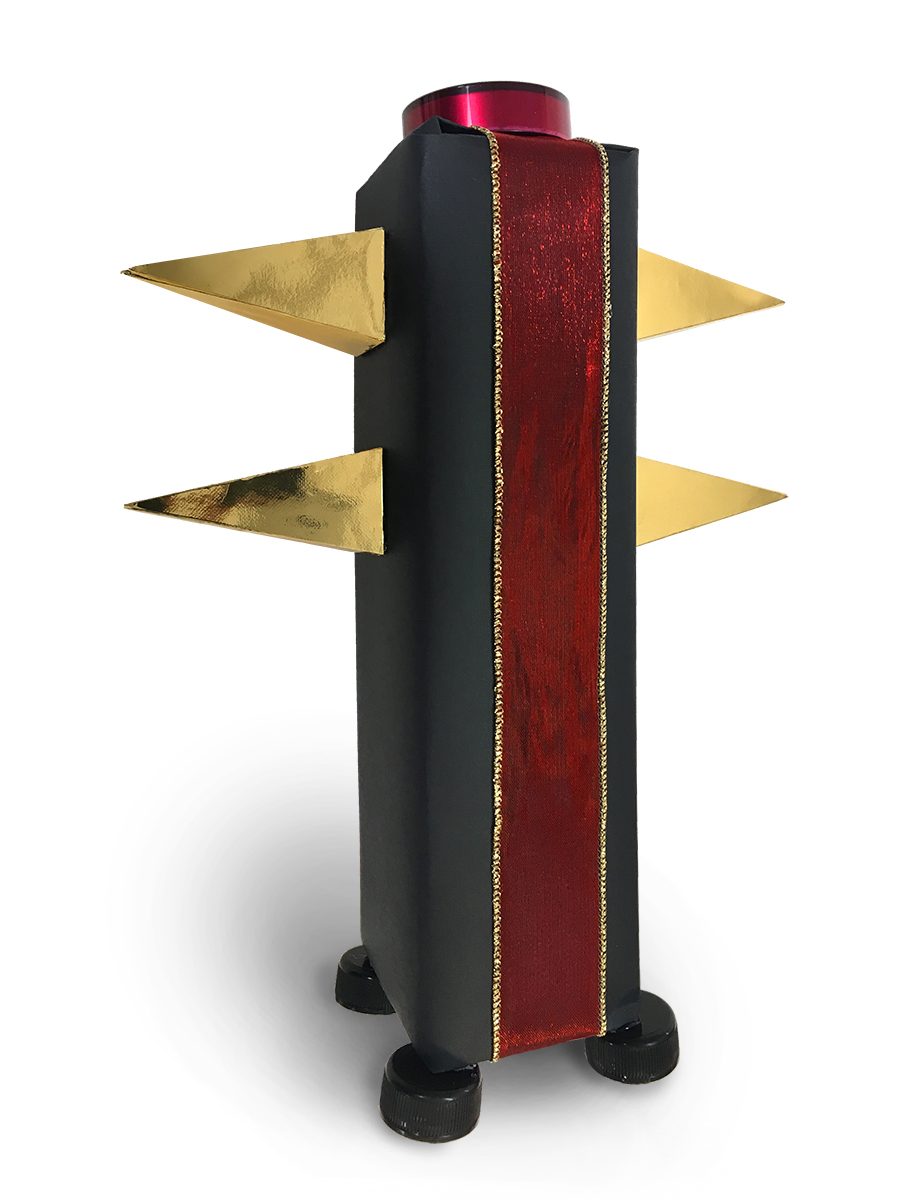 It all began with a box and the black paper. The gold pyramids had arrived a few months earlier. The contain pyramidal tea bags. The gold foil was on the inside of these beautiful little boxes. They had no glue, just folds and inserts, so I could unfold and refold them, revealing the foil. I know that ribbon would bring this wrap nearly to completion. I picked a fat one with gold edges. Next I added a thick plastic cap from some cosmetic product, an item that I had saved for a long time.

The wrap looked better standing rather than lying down. But it would not stand up on its own. So added feet. Its label was a stick-on file label.

One can start with a traditional form, and then add a slight variation which gives new visual snap. My base paper here is the shopping bag which took the gift home. I am using the inside of the bag’s paper, with images of fruits and flowers. I then proceeded to improvise with ribbon, using contrast of thick and thin ribbon, as well as contrast of light and dark, shiny and matte. I started with traditional ninety-degree ribbon placement. Then I began to look for the variation that would take the wrap a step past normal. I tried many ribbons placed at various places, but all at a forty five degree angle relative to the wraps edges. Finally I tried the black. Happy, I added another strip of silver cord adjacent to the black ribbon and then I was done. This was an easy wrap. 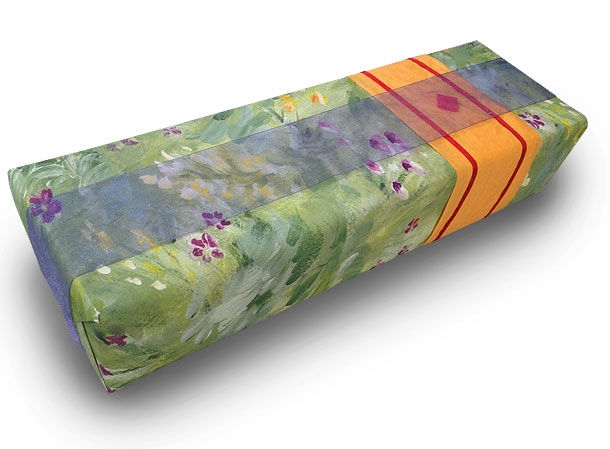 When you buy cut flowers they come wrapped in durable, handsome paper. And the sheet is large enough to do some serious wrapping. This particular sheet appeared to be a form of plastic. It folded and creased in a pleasing fashion. After wrapping the gift I resorted to speedy and reliable ribbon-wrap tactics. First I made a yellow band of tissue paper, gluing it on the back. I then added two strips of a thin, shiny red ribbon to back a border stripe on the yellow band. The little red square is made of craft foam, placed at a 45 degree angle. I then completed the wrap with the transparent-weave blue ribbon (which had been cast off at an awards dinner by the medal winners, and retrieved, rolled up and removed for recycling by yours truly) running transverse to the band. I made this wrap quickly: no time for innovation. A house to be warmed; a dinner to be enjoyed. 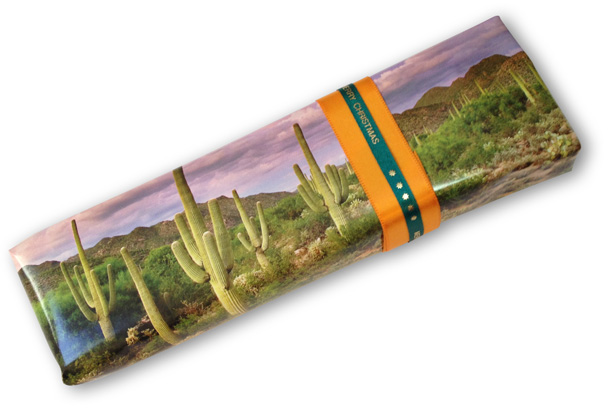 Marketing literature can deliver a lot when you are making a quick wrap. I had saved a large mailer with these tasty saguaro on it. The brochure was very large, so no words were revealed. After a bit of positioning and observation, I wrapped up the box rapidly. I added orange ribbon to complete the secondary color triad that was begun with the photo’s own purples and greens. And last of all I used a skinny piece of dark-green christmas ribbon. A delicious wrap in no time at all!