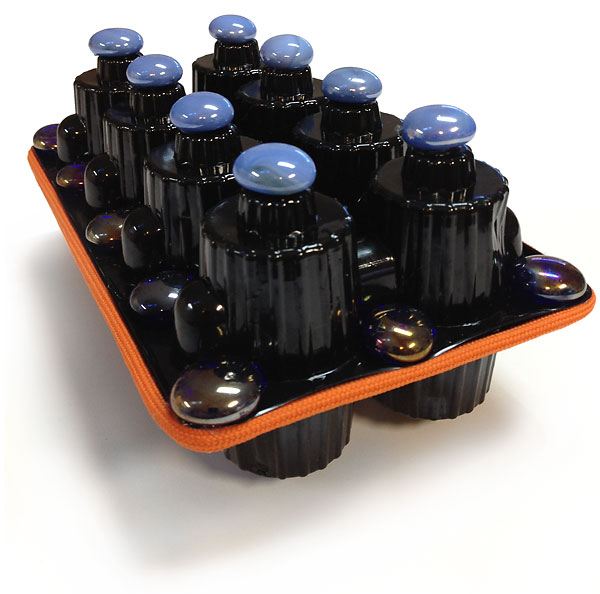 Open a box of chocolates and you find them arrayed in peculiar trays of thin molded plastic. The careful laborious detail and curious shapes of these moldings stand in stark contrast to their humble role as quietly supportive servants, doomed to be ignored and then trashed the moment the last chocolate has been been eaten.

But should you have one or more small gifts, a pair of these trays can have a reprise role as wrap.

At least that is what I thought in the aftermath of a tasty christmas. I joined the two trays with small pieces of two-sided tape, trapping the gift in small pieces of tissue. I then glued an orange shopping-bag handle around the edge; it sat easily in a groove made by the combined shapes of the trays’ edges.

Looking at the eight fluted pedestals of the inverted tray, it seemed obvious that they wanted something to perch on top. I had just received two bags of melted marbles. Their shiny surfaces seemed in sympathy with the shiny black plastic. I glued eight of the pale blue pebbles on the tops of the pedestals, and then added ten of the dark metallic ones — even closer in sympathy with the plastic, but different — around the pedestals’ bases. The dense glass pebbles contrast in mass with the ethereally thin plastic.